In the first article, Joint Communications Officer Annabel Darby has interviewed DANDRITE group leader, Duda Kvitsiani, about his work and the questions that he is trying to answer with his research. She also interviewed Dr Kvitsiani's PhD student, Juliane Martin, about her research project.

Dr Duda Kvitsiani was initially trained as a molecular biologist, and completed his PhD in Vienna at the Institute of Molecular Pathology, where he worked with fruit flies on genetics and neuro biology.

Dr Kvitsiani then moved to Cold Spring Harbour Laboratories in the USA where he completed a postdoc on rodent behaviour and decision making, and electrophysiology and optogenetics. Dr Kvitsiani started as group leader at DANDRITE in 2014, and recently had his group leader extension approved for another four-year period until 2023.

Can you describe your research in a nutshell?

My group mainly works on foraging decisions, and how the brain operates to make such decisions. It’s a really broad field, but it basically deals with how animals make decisions and solve problems when faced with uncertainty. When we make a decision, we have to process past experiences and also adapt to the current environment, so the process not only involves memory but also how we are feeling in that very moment. For example, if you experience a lot of positive things after a certain decision then this might prompt you to go back and make the same decision again. However, there are also times when the outcome of a decision can be ambiguous or even bad, so we also try to understand how the brain integrates all this information.

We also try to understand why short-sighted and impulsive decisions are made, such as when a decision is focused on a short term goal with no apparent consideration for the long term effects.

Another angle we study is the balance between exploration and exploitation. When you are foraging in the outdoor environment, you don’t always know what goods are there. Sometimes you want to explore, but sometimes you just want to exploit the current situation or local environment. Where to draw the line between exploitation and exploration is something the brain also has to deal with.

Can you briefly introduce your group and your lab setup?

I have purposely built a very diverse group, as neuroscience is very multidisciplinary by nature. We have four PhD students, two postdocs and one research assistant. Our researchers are from lots of different backgrounds, including engineering, molecular biology, physics and chemistry. I think this mixture helps us to think more broadly about a problem, and tackle it in a really effective way.

What big questions are your trying to answer with your research?

A bigger, more general question for us boils down to how the brain learns. For me, neuroscience gives us the opportunity to look into how the brain solves problems. The brain is probably still the most intelligent and complicated machine, so I think to be able to understand how it actually solves problems would be really incredible.

Unfortunately, animal behaviour can’t tell us everything about how the brain learns. Whilst we can use a camera to monitor animals making decisions, and monitor their brain activity, the biggest question we still want to solve is how they are actually making these decisions.

What are you working on right now?

As I have a very diverse group, they work on different projects. However, I do try to synergise them. At the moment the lab is effectively ‘split’ in two parts. One part is mostly dedicated to developing tools and technology that can help address certain questions. For example, they are working on the development of a holographic light stimulation tool that we can use to try and determine animal behaviours.

On a more scientific level, we are trying to understand how individual neurons report the time of events that happened in the past. We have some indication that the region of the cortex, which was previously known to be involved in working memory, reports events that happened to the animal seconds ago. We believe that these individual neurons carry this time information, but this is just a preliminary finding, so it will be exciting to find out more.

What’s the most exciting thing you have discovered?

We are probably not right at the point of a ‘big’ discovery, but we have some leads where things are getting exciting in terms of what animal behaviour might look like. To a naïve observer, animal behaviour can seem quite erratic and chaotic. However, if you build a computational model, and try to understand from a more ordered perspective, it turns out that the behaviours we observe are actually quite rational, which is very interesting."

Often we think an animal’s behaviour isn’t especially optimal, but there are actually lots of reasons behind their decision. It will require a more mathematical framework to really understand this, but I’m excited about what we might find here.

Your position at DANDRITE has just been extended for a further four years. What do you hope to achieve in this second period as group leader?

I hope to be able to carry on with developing effective research tools, and finding the answers to things we still don’t fully understand. One thing that I am particularly excited about is to understand how neural networks learn. Learning means that the connectivity between neighbouring neurons has to change as a function of experience, and this process is something we haven’t yet solved - we don’t know what the local rules are that dictate synaptic plasticity and learning in the neural network. I hope to spend time working on developing tools that can address this question in my next phase as group leader.

What are the potential patient benefits associated with your research?

I think it’s just a matter of time before we can fit more basic research into patient care. Human diseases and conditions are not my lab’s direct interest, but I’m very happy to collaborate with psychiatrists who are working in this field; in fact I’m currently working with some psychiatric researchers at Aarhus University. We are now also able to generate human research tasks that are replicated from animal tasks in the lab. Hopefully, this collaborative work will help to shed light on human behaviour, and it would be very interesting to understand what is really going wrong in instances such as addiction and gambling.

Some of the tools we have developed, such as the holographic light stimulation tool, have also pushed us to develop some technology that can be useful in clinics. For example, there is a field of research called neurofeedback, which is a way to train brain activity. Neurofeedback allows us to compare what your brain is actually doing in relation to what you'd like it to be doing.

Do you work with other groups in Aarhus, and have you collaborated with anyone else in the Nordic EMBL Partnership?

Locally, in DANDRITE, we often end up collaborating naturally, due to shared space and some shared research interests. As mentioned, within Aarhus University, we collaborate with human psychiatrists, and we also work with the engineering school, who we have worked with on developing some of our research tools.

In terms of further afield, such as within the Nordic EMBL Partnership, we are hoping to be able to work with researchers in human genomics at FIMM, and the other groups working on aspects of human psychiatry, such as at NCMM."

It of course takes time to build collaborations; our focus is currently on rodents but we are trying to do more human work and at this point we’d like to reach out to more researchers here.

PhD student, Juliane Martin, also shares some insight into her current projects in the Kvitisiani Group: 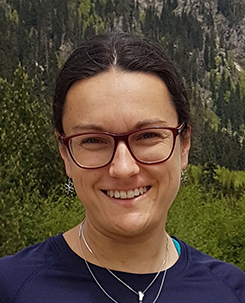 How long have you been working at DANDRITE, and what were you doing before?

I’ve been at DANDRITE for about three and a half years now. I’m originally from Germany, and after finishing my Master’s in Molecular Biosciences with major in Neuroscience at Heidelberg University in Germany, I moved here to join Duda’s group.

What are you working on right now?

Simply put, my project is to study decision-making in mice, and to understand how pre-frontal circuits contribute to the decision process. One aspect has been to establish a decision-making task where animals can choose between two options which provide rewards with different probabilities. I look at how they integrate these probabilities and past events for future choices.

Another aspect of this project is to manipulate the wait delay for mice before they make a decision, and to then study the effects on their choice behaviour. The reason for this is that current behaviour tasks follow a trial structure that allow us to discretise the observed behaviour. So we study decisions trial, by trial, by trial. However, this is of course slightly artificial compared to a ‘real life’ situation, which is more continuous and which follows various time scales. This poses the question whether mice care about the temporal delay between events or not.

To answer this, I didn’t change anything about the trial structure, but manipulated the wait delays to control the elapsed time for the task.

The current literature is quite unclear on this aspect, and some theories would predict that this manipulation shouldn’t have any effect. However, in our project we see a clear effect of wait delays on choice behaviour. We now want to better understand the underlying mechanisms."

What do you enjoy most about your research?

I really enjoy working with the animals; I think that’s what I love most about my research. I would really like to understand what they are actually doing and why they are doing it - I think it’s a really exciting thing to think about.

It would be really fascinating if you could actually crack the code in the brain and relate it to behaviour; that (and the animals) is what motivates me to do my research.